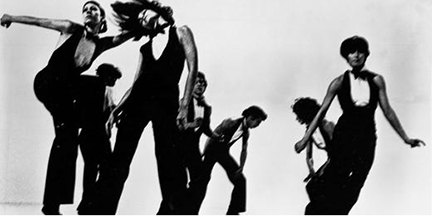 Groundbreaking in her synthesis of dance techniques and vocabularies, Twyla Tharp pioneered a crossover style that combines elements from classical ballet, jazz, tap, athletics, hip-hop, and more. With music by Jelly Roll Morton, EIGHT JELLY ROLLS marks a key point in Tharp’s early career, the moment she turned away from postmodern dance aesthetics to explore music, movement invention, and a conscious effort to please the audience.

Eight Jelly Rolls was the first piece Katie Glasner performed with the Twyla Tharp company. As a performer, Ms. Glasner danced at the White House during the Reagan administration, in the ancient amphitheater of Caesaria, on Broadway in Singin’ in The Rain. Her teaching credits include Princeton Ballet School, Ballet Hispanico, American Music and Dramatic Academy, Princeton University, New York University, Penn State, Wesleyan College and University of CA/Irvine. Currently Assistant Chair and Senior Associate Department of Dance at Barnard College (Columbia University), Katie is committed to passing on the legacy of dance in every way possible.

Jennifer Way Rawe danced with Twyla Tharp Dance from the 1975 to 1988. During her time with the Tharp Company, she performed in all of the company’s active repertory, including projects for television and film, such as Hair, Ragtime, and Amadeus. Besides being a performer, Jennifer Way Rawe was responsible for reconstructing and rehearsing repertory within the Tharp Company and transferring Tharp’s works to other companies. She has taught and coordinated numerous workshops and master classes for Twyla Tharp Dance and independently. From 1990 –1997, Ms. Way Rawe served on the faculty at NYU Tisch School of the Arts, and from 1999 – present, she has served as company rehearsal director for Dancewave’s Kids’s Company, in Brooklyn NY, and continues to teach and stage Tharp repertory in colleges and universities.